Restaurants in Las Vegas may draw attention for their artwork, their exotic décor or their cocktail program, but only one is known for the chef’s office door: N9NE Steakhouse at Palms Casino Resort.

Executive Chef Barry S. Dakake’s office entrance—known affectionately as the “Shakedown Door”—has become a tradition to sign for the big names in sports, entertainment, politics and music ever since basketball phenom Carmelo Anthony started the practice many years ago.

As Dakake recalls, Anthony wanted to sign something other than the typical t-shirt or poster. “I had a brand new fire-treated-concrete door in my office, painted deep tan. At first, I let everybody sign. Now you don’t sign the door unless you’re A-list,” he quips.

The reason N9NE Steakhouse continues to draw a crowd worthy of signature is because Dakake and the staff have created a destination restaurant in a city crowded with every type of dinner house imaginable. Located a few blocks off of The Strip, N9NE Steakhouse is a must for lovers of prime meat and pristine seafood.

Dakake himself marvels that he now leads the kitchen of a steak house. “My passion was fish. I grew up in the Ocean State and loved it,” he says of his Providence, Rhode Island, childhood.

“We spent every summer in Old Orchard Beach, Maine. I couldn’t wait to get up and go to the dock,” he recalls, where he would barter for lobsters. “I didn’t spend my money on amusement parks, I spent it on lobster—at age eight.”

Back home, the budding epicurean worked at his uncle’s diner, “We served two pieces of toast, eggs and home fries for ninety-nine cents. We’d have a thousand customers for breakfast,” he explains, recalling his amazement “when you’re a child and you see those dollar bills stacked up from breakfast.”

He formalized his culinary education with a degree from Rhode Island School of Design and signed on with Charlie Palmer’s Aureole restaurant in New York, working under sous-chef Neal Murphy. “I owe all my hard work and dedication to that man,” Dakake states about one of his mentors, noting, “You need those guys that push you, that get the most out of you. He changed the playing field for the cooks who could take the heat in the kitchen.”

Dakake would need inner strength in the years ahead. After being diagnosed with non-Hodgkins lymphoma, he entered remission only to be hospitalized for 15 weeks because of spinal tumor complications. He credits “my faith in God, my family and my wife then, Denise," for getting him back to health—and on the road to work at Aureole Las Vegas.

There, he met the creators of Palms Casino Resort, the Maloof family, who convinced him to join their meat-centric kitchen at N9NE.

Dakake’s bone-in-filet is the best-seller on his menu, he says, but for him, the cut to order is the porterhouse. “It’s the best of both worlds, the filet and the New York, on the bone."

The other best seller is the lamb chop dish featured here. Since N9NE opened in 2001, it has been off the menu only once, he says. When customers flooded him with requests, “we brought the lamb chops back. Everybody was happy, including me." 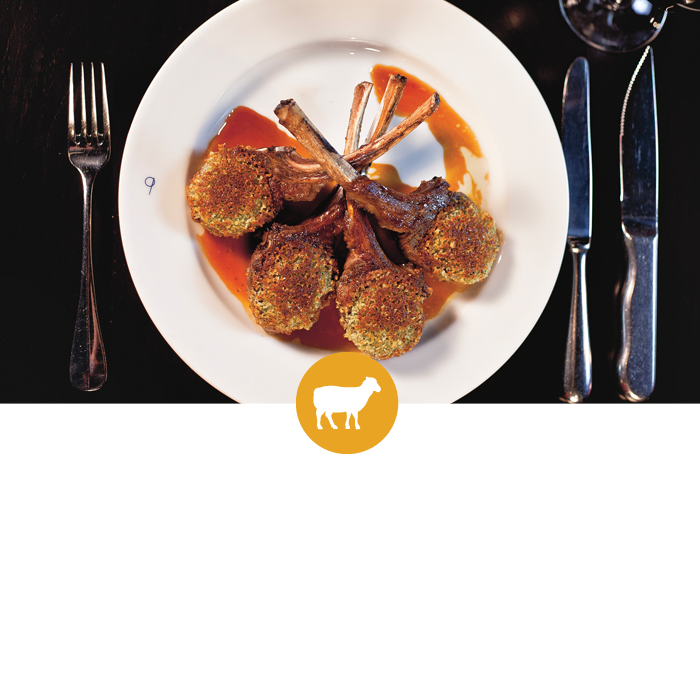