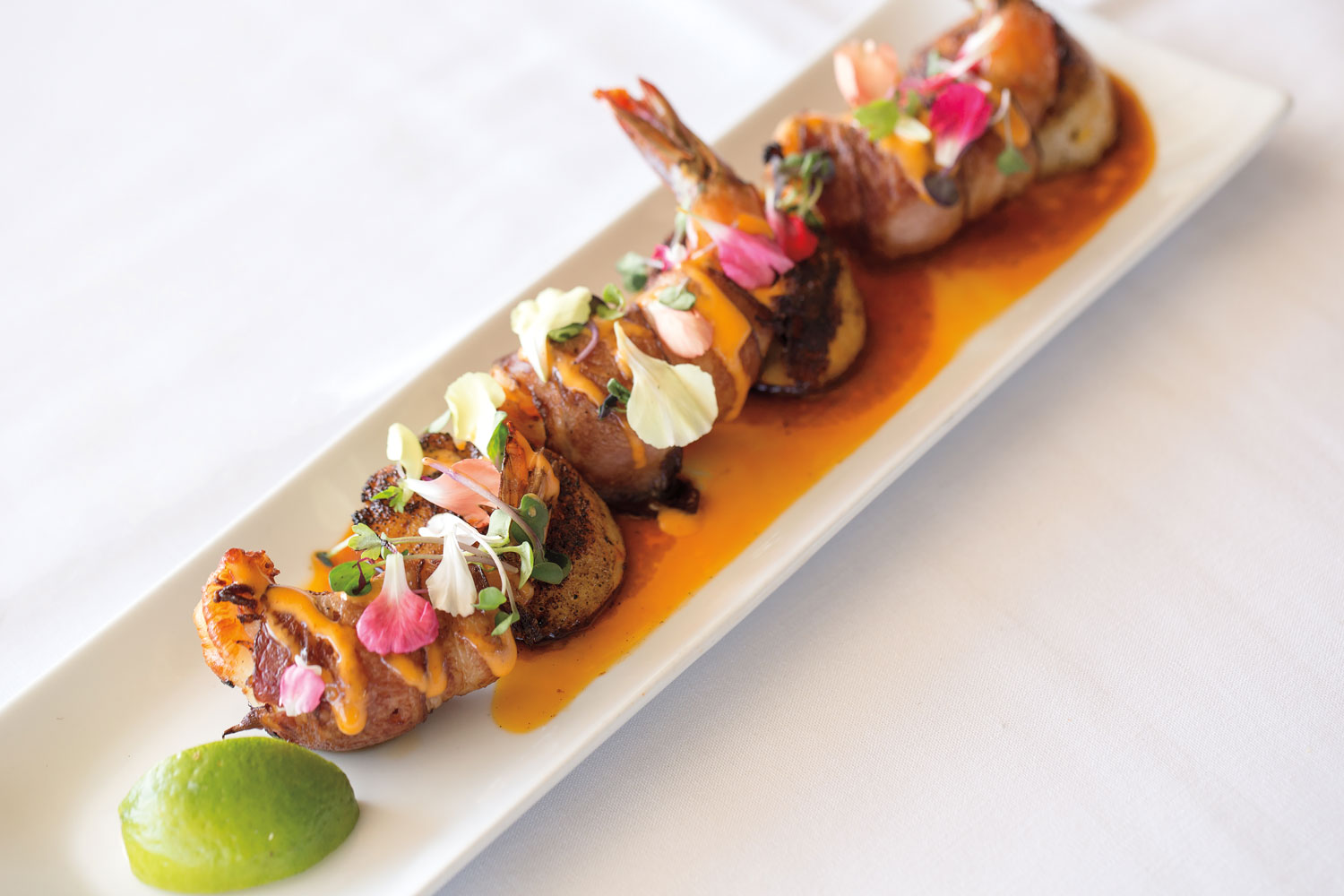 Although we are not purveyors of fresh fish and shellfish, we carry a wide variety of frozen shrimp, crab, lobster, calamari, scallops and fish fillets.

According to the National Fisheries Institute, Americans eat more shrimp than any other seafood, consuming 3.6 pounds per person in 2013, the most recent year calculated. That was the year that salmon knocked canned tuna out of the number two spot: the nation gobbled up 2.7 pounds per capita of salmon versus 2.3 pounds of canned tuna. Tilapia, pollock, pangasius (also known as basa fish and swai), crab, cod, catfish and clams round out the list of top 10 preferences.

The United States, by the way, ranks third worldwide in seafood consumption per capita, far behind the Japanese, who eat more than three times as much as we do, at 145.7 pounds. The Chinese also eat more seafood, totaling 56 pounds per person versus our 47 pounds.

Just as the federal government inspects and grades meat, the National Oceanic and Atmospheric Administration reviews and grades seafood. Both are voluntary programs. Most seafood receives a grade ranking from A (the top) to C (the lower grade in some varieties is “Substandard”); consumers of whole fish fillets and shellfish, either fresh or frozen, as a rule only see grade A or B products.

As go national seafood trends, so go West Coast Prime Meats sales. Our most popular seafood item is shrimp. We offer a variety of sizes, which take their names from the number of pieces per pound. The largest shrimp we carry are U10s (i.e., under 10 per pound), followed by U12s and U15s. From there, the shrimp decrease in size, down to cold water bay shrimp, which number 250 to 300 per pound. Most of the shrimp we offer are termed Individually Quick Frozen or IQF. The flash-freezing process allows the shrimp to maintain their texture, aroma, shape and flavor.

There are many different breeds of shrimp, from Santa Barbara spot prawns to rock shrimp to black tiger shrimp. We prefer Mexican white shrimp for their sweetness and firm texture. Restaurants list these shellfish as either shrimp or prawns and, while taxonomically there is a difference between a shrimp and a prawn, the terms are intertwined in the United States.

Another popular partner for steak is lobster. If asked to describe a lobster, most Americans would probably envision the red-clawed, cold-water breed dubbed Maine lobster. That tasty crustacean is not the kind customers usually encounter when ordering lobster tails. Tail meat tends to come from clawless lobster breeds, where the edible section is larger and less tough.

The “prime” variety among frozen lobster tails is the cold-water one sourced from Western Australia. We also offer a more economical warm-water tail from Caribbean waters off Nicaragua. Water temperature will affect the firmness of the tail meat and the flavor.

Calamari are a species of squid and most likely will be used for appetizers, where the tubular bodies, cut in rings, might be fried, grilled or braised. Kept whole, calamari may be stuffed and roasted or grilled.  The calamari’s sizes depend on the tube lengths, commonly five inches to eight inches long, and sell in tubes, rings or filets, with or without the edible tentacles.

The most common species of squid is Loligo, which is caught around the world and has several subspecies. California Loligo is known for its thin walls and firm bite while East Coast Loligo has thicker walls and a softer bite. Both are delicious.

For the home cook who buys whole tubes, remember to reach inside each one and remove the plastic-like inner shell, also called the quill, prior to cooking. If you buy the whole cephalopod, you will need to pull out the tentacles, beak and inner organs, which include the ink sac—squid ink is a popular addition to fish stews, sauces and pasta dough—then remove the quill.

When in season, jumbo varieties such as the California Humboldt squid and Japanese flying squid offer the option to serve a calamari steak, a menu item that began to appear in the mid-1970s when it was promoted as POOR MAN'S ABALONE. Cut the squid in two-inch-wide strips, dip the strips in egg wash, coat them with panko breadcrumbs and fry over medium-high heat, top each strip with a slice of Monterey cheese and continue to cook until the cheese melts. Serve immediately.

Sea scallops are the larger entrée-sized bivalve, ranging from U10 to 30/40 count. Tinier bay scallops often pop up in stir-fry dishes, soups and stews, ranging in counts from 50/60 to 110/120.

When you eat scallops (or oysters, clams or mussels), the meaty portion you eat is the adductor muscle, which allows the bivalve to open and shut its shell. With scallops, the adductor muscle may still have a thin strip of gristle attached. We recommend you remove the gristle, especially when using sea scallops. It easily peels off by hand or with a sharp paring knife.

Scallops will sometimes be sold as Coquilles St. Jacques, which translates as St. James Shell. This scallop traditionally comes on the half shell with the scallop eggs, or roe, intact. Don’t discard the orange roe; blend it with butter, herbs and wine for a quick seafood sauce; oven-dry it and grind it into powder and sprinkled over pasta; or simply cook it with the scallop.

The 10/20 count scallops on the left are typically served 3 or 4 to an entree.

The bay scallops on the right (shown here at 60/70 count and barely wider than a dime) would be used in stews and soups. 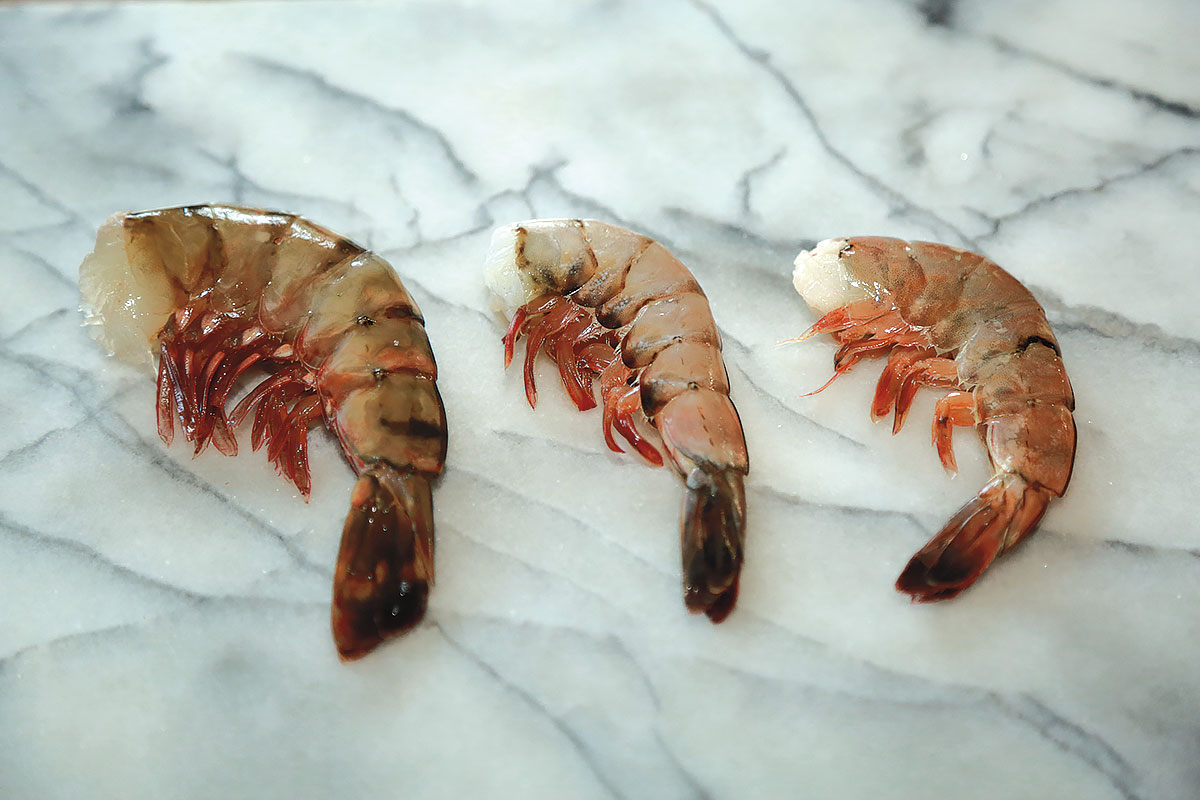 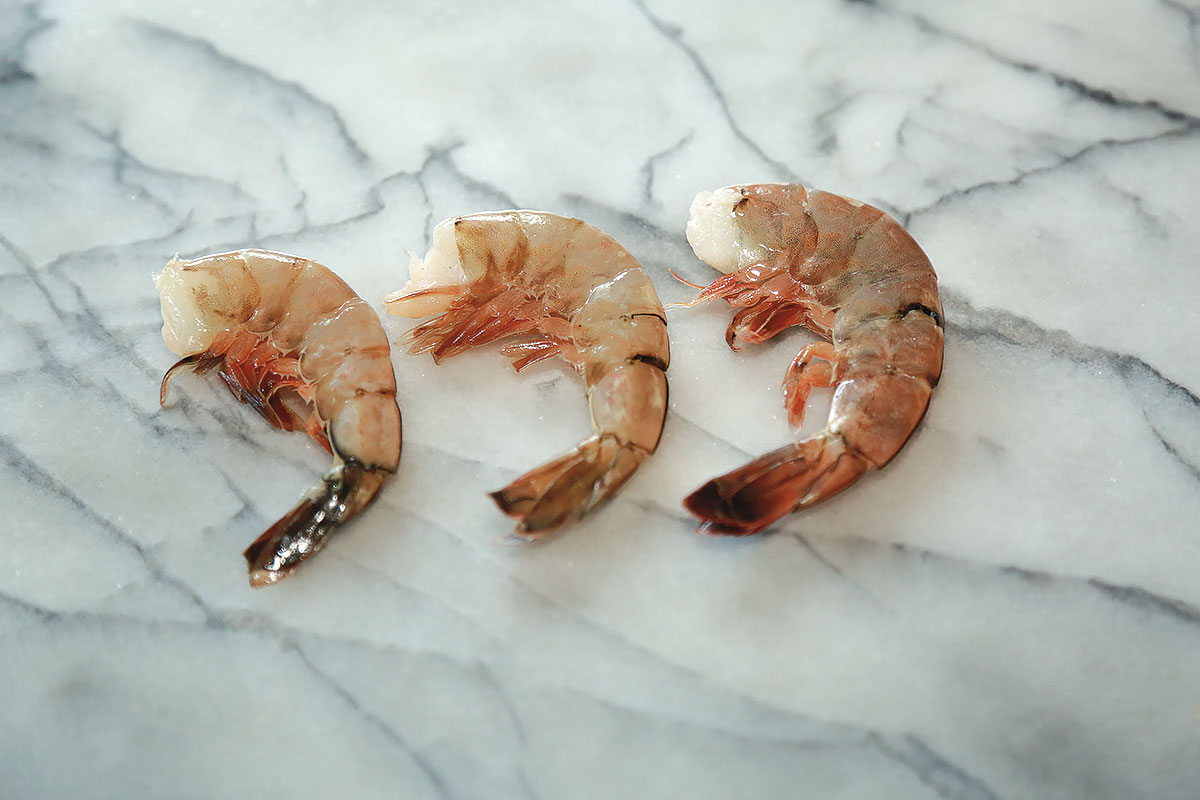 Shrimp sizes vary within each category. Notice the difference in size in these three pieces, all from a pound of 21/25 count white Mexican shrimp. 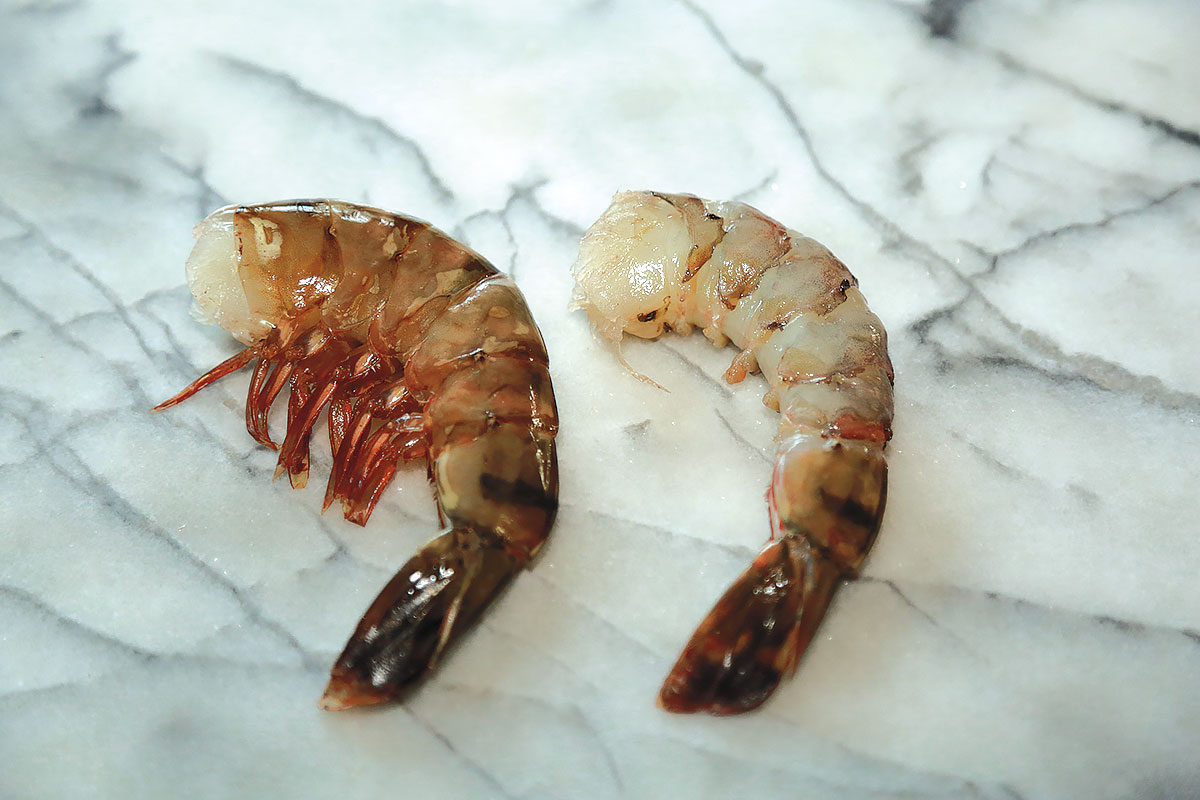 Shrimp sizes also vary if they are shell-on (left) or peeled and deveined (right). Both shrimp came from a pound of shell-on 6/8 tiger prawns. 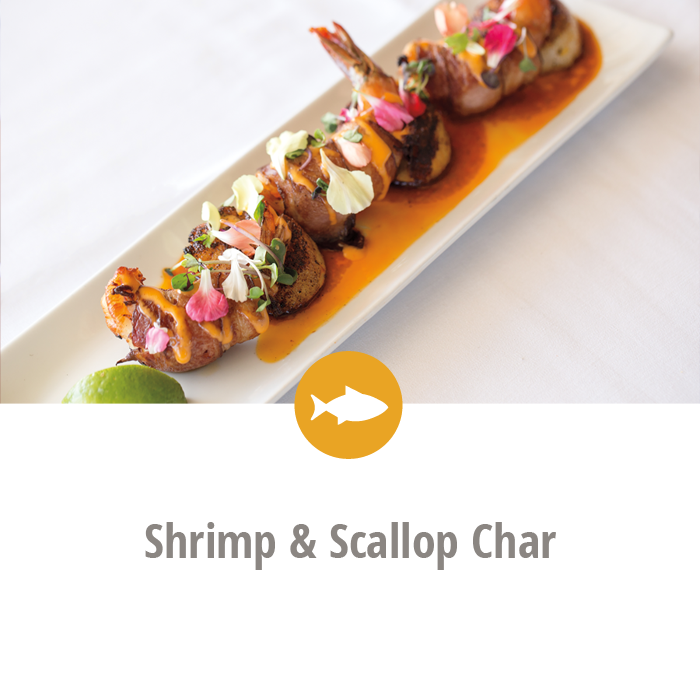 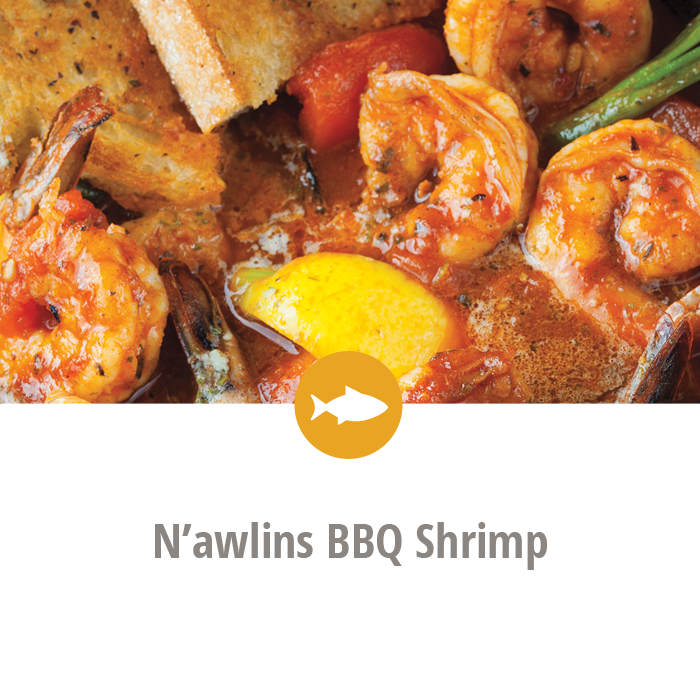