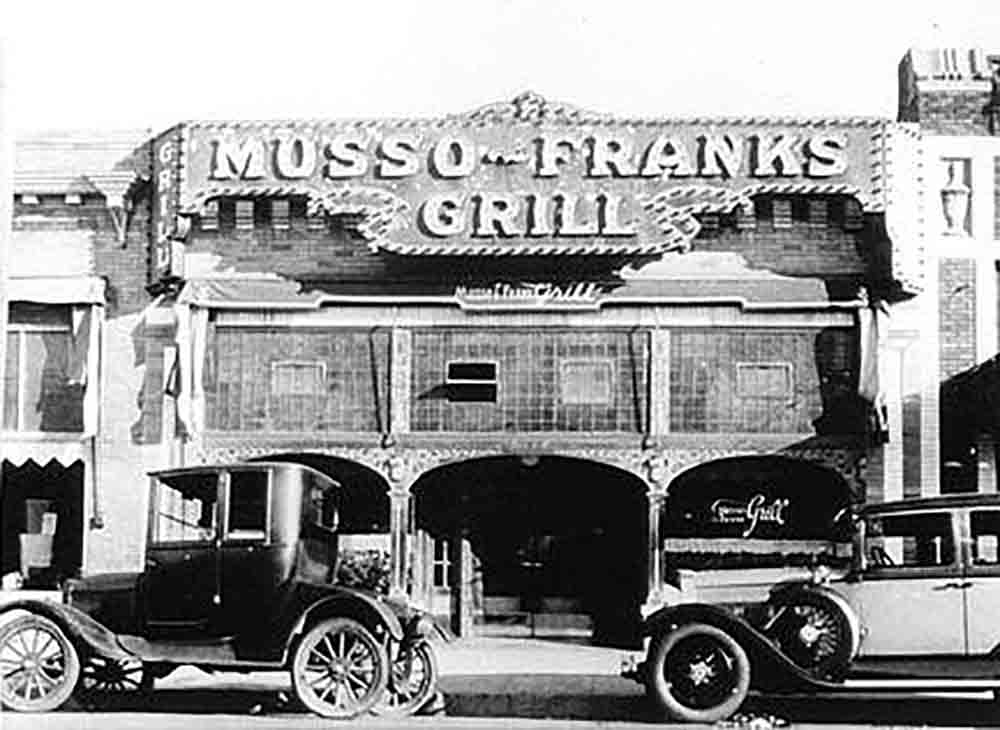 The Musso & Frank Grill may be the oldest restaurant in Hollywood, but the near centenarian is by no means growing old. In the last decade, fourth-generation owner Mark Echeverria has breathed new life into the entertainment industry stronghold, aided by Executive Chef J. P. Amateau.

When Frank Toulet launched Frank’s Café in 1919, he created an enduring venue for hospitality. Shortly after opening, he partnered with Joseph Musso, changing the restaurant’s name to the Musso & Frank Grill. The partners hired French-born chef Jean Rue, who created the menu, much of which continues today.

By 1927, Musso and Frank were out and Italian immigrants John Mosso and Joseph Carissimi took over, retaining the name but moving the business next door to its current location. It would take another 82 years until ownership changed again. Mosso’s three granddaughters purchased the Carissimi’s half and took full control. Echeverria, John Mosso’s great-grandson, now has the reins.

The scion is no stranger to hospitality. He comes to the Musso & Frank from a career in resort management. “In 2009 when the family took over, they looked at the fourth generation. I was the only one with management experience who could make the career move,” Echeverria explains.

“My grandfather taught me, ‘if you can’t do a job, find someone who can do it better than you.’ So I brought in J. P.  The issue was with the food and the quality of ingredients,” he specifies.

It may come as no surprise that Amateau, a Culinary Institute Of America graduate who succeeded at revitalizing a decades-old menu while respecting the restaurant’s traditions, is a former Hollywood stunt man. He is only the third person in 100 years to wear the chef’s toque at Musso & Frank’s.

“When I got here, things were in the past. There were no recipes, everyone had their own interpretations,” Amateau describes. “I revamped the menu, updated some ingredients and added a pasta selection,” he says.

Stop by the Musso & Frank Grill on any given day and you will find what draws visitors to Hollywood: a group of movie executives will be hammering out a deal in one corner booth; a section of the restaurant may be cordoned off to accommodate a film shoot; and this year’s crop of up-and-coming celebrities will be cocktailing it in the bar.

The bar is legendary, a fixture relocated from the former Back Room behind the restaurant. There, the likes of William Faulkner and Raymond Chandler pored over books purchased at neighboring Stanley Rose book shop to flesh out their next screenplay or novel. The tradition continues today with writers and artists of all stripes frequenting the bar to enjoy a classically crafted Manhattan or Martini.

But what really draws customers to the Musso & Frank Grill, apart from the professional, red-coated army of knowledgeable waiters, is the charcoal grill and the smoke-seared steaks that the grill chef produces from it. Amateau expresses his amazement at his grill chef, Indolfo, because he has always worked without order tickets and will hit the right temperature on every steak he cooks. “When we installed the point-of-sale system, we asked him, but he didn’t want tickets,” Echeverria says, continuing, “it’s all in his head.”

The grill man answers to a demanding boss; Echeverria grew up on a ranch in Nevada and knows his meat. “We had a cow-calf operation: we bred the cows, raised the calves and sold them to stockyards. At the time, I had no idea I would be running a restaurant one day,” Echeverria confides.

The menu of steak selections has changed over the years, Echeverria claims, but there has always been a filet and, since the early days, a New York steak on the menu. Everything that accompanies the steaks and fills out the Continental menu is made from scratch daily in the enormous prep kitchen, which is on view to customers who use the regular’s entrance, off the rear parking lot.

Another favorite menu staple is the weekly rotation of daily features. They are all delicious, from the corned beef and cabbage on Tuesday to the beef short ribs on Saturday. We’re partial to the Thursday night chicken pot pie, loaded with tender chunks of chicken breast meat and savory gravy under a buttery short crust.

A unique item dating back to the Jean Rue days is Grenadine of Beef, featured here. The filet preparation includes a twist on Béarnaise sauce that starts with a unique tarragon base. “It’s one of the originals,” Amateau says, and provides those who order it a taste of classic Hollywood. 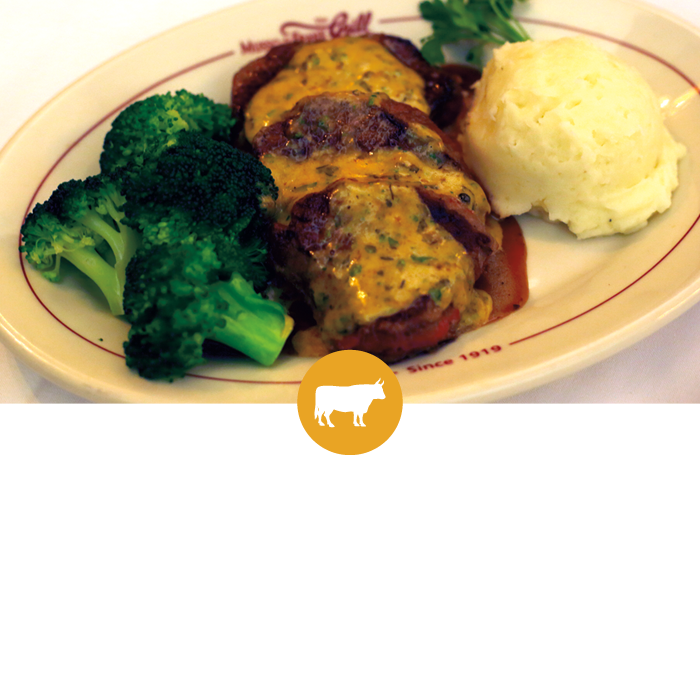